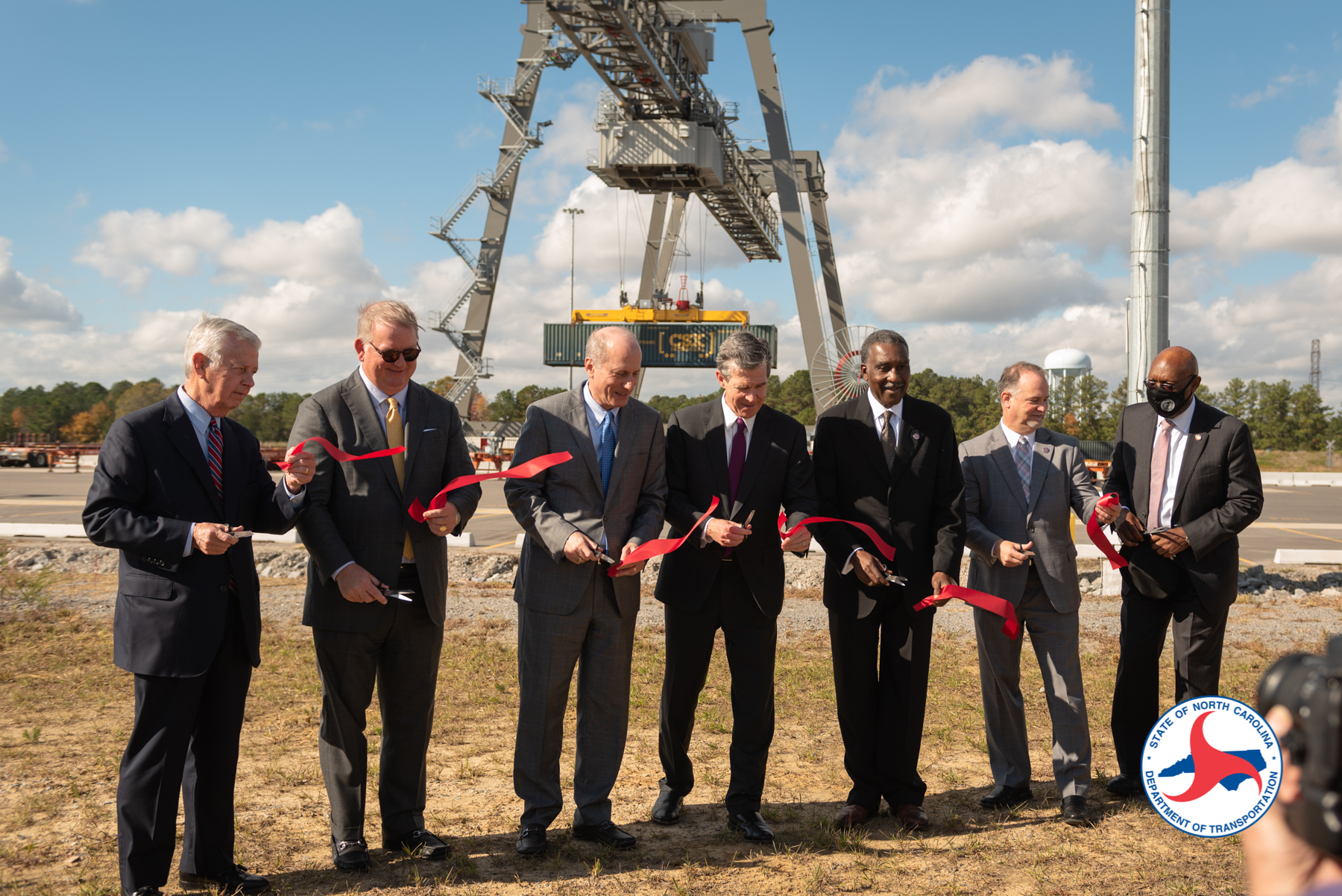 At a grand opening ceremony held yesterday, officials with CSX and NCDOT, which shared construction costs, hailed the terminal opening as a positive development for both the regional economy and the nation's supply chain. Photo – NCDOT/CSX

The facility, which is considered one of the most technologically advanced facilities on the CSX network, will help relieve port and highway congestion by adding rail-to-truck transfer capacity for domestic and international container shipments, CSX officials said in a press release.

CSX yesterday announced it’s been named to the Dow Jones Sustainability North America Index (DJSI North America) for 2021, the Class I’s 11th consecutive year on the list. CSX is the only U.S.-based railroad included in the index and the second Class I to announce its inclusion, the first being Canadian Pacific. The index represents the top 20% of North America’s 600 largest companies (as evaluated by S&P Global) that demonstrate sustainability initiatives. Dow Jones' corporate sustainability assessment evaluated the economic, environmental and social criteria for meeting index designation. CSX’s sustainability goals include reducing greenhouse gas emissions by 37.3% between 2014 and 2030, according to its website. CSX has already accomplished its goal of reducing emissions intensity by 6% to 8% in 2020, achieving 8.1% emissions intensity reduction and reaching the goal two years ahead of time. "Our efforts have improved upon the emissions advantage rail provides as the most fuel-efficient mode of land-based transportation," said CSX President and CEO James Foote in a press release. "We continue taking action to further reduce emissions for the freight already moving on CSX and are committed to driving additional reductions through converting incremental volumes off the highway and onto CSX."
Original link

"Our customer solutions department has not seen a recent increase in service inquiries and we were not aware of informal complaints increasing to your public affairs office," Foote wrote Nov. 2 to Oberman. "We serve more than 5,000 customer facilities and to address issues we need to know certain key facts: when, where and which customer facility."

CSX Corp. yesterday announced third-quarter 2021 net earnings of $968 million, or 43 cents per share, compared to $736 million, or 32 cents per share in the same period last year. CSX posted an operating ratio of 56.4% in Q3 2021 compared to 56.9% in the prior year period, CSX officials said in a press release. Revenue for quarter climbed 24% from the prior year to $3.29 billion, driven by growth across all business lines, increases in other revenue and the inclusion of Quality Carriers’ results. Operating income improved 26% to $1.44 billion for the quarter. "I want to thank all of CSX’s railroaders for their continued dedication to our customers amidst the combination of ongoing supply chain disruptions and challenges presented by the COVID-19 Delta variant this quarter," said President and CEO James Foote. "We are committed to helping our customers overcome current supply chain constraints and will continue to take action in order to keep our network fluid and design new solutions that enable the delivery of critical goods to millions of Americans."
Original link
Tags:
CSX

CSX yesterday recognized 71 customers with the Class I's annual Chemical Safety Excellence Award for their commitment to the safe transportation of hazardous materials.

Representing a wide range of industry segments — including chemicals, biofuels, waste and fertilizers — the award winners shipped a combined 238,000 carloads of hazard materials on the CSX network in 2020 without a non-accidental release due to controllable factors, according to a news release