Most Class Is cut capital spending for 2017 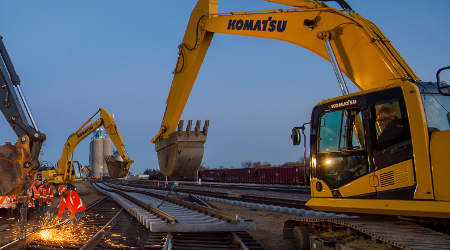 Most Class Is expect to spend less on capex in 2017.Photo – bnsf.com

The seven Class Is have announced their capital spending programs for 2017 and the year-over-year scorecard shows five plan to spend less, one has budgeted more and one has allocated the same amount.

Canadian Pacific is allocating 1.25 billion Canadian dollars for its capital expenditures (capex), up 6 percent compared with its 2016 budget. About 70 percent of the spending targets basic replacement and maintenance work, with the balance budgeted for initiatives designed to boost productivity and service reliability.

Because the Class I has more than 400 locomotives stored, it won’t need to acquire new units for the next several years, CP officials believe. But some 2017 capex funds are earmarked to modernize the locomotive fleet and improve its reliability.

At Norfolk Southern Corp., the 2017 capital spending plan of $1.9 billion matches last year’s capex. The funds will help the Class I maintain the safety of its network, enhance service, improve operational efficiency and support growth opportunities, NS officials said in a press release.

Among the five other Class Is that are budgeting less for capex this year, Union Pacific Railroad's $3.1 billion program is down 11 percent compared with 2016 capex of $3.5 billion. More than half of the 2017 budget targets work to harden infrastructure, replace older assets, and improve the network’s safety and resiliency. In addition, $300 million is allocated for ongoing PTC implementation.

UP previously had planned to acquire 100 locomotives in 2017 as part of a prior purchase commitment, but this year's capital plan now includes about 60 locomotives, with delivery of the remainder delayed until 2018.

BNSF Railway Co.'s 2017 capex of $3.4 billion has dropped nearly 13 percent from 2016's $3.9 billion, in part because the Class I has invested a lot of capital in network improvements and growth during the past several years. This year’s budget includes $2.4 billion to replace and maintain the core network and related assets; $400 million for expansion projects; $400 million for locomotives, freight cars and other equipment; and $100 million for PTC.

At CSX, capex has declined to $2.2 billion from 2016's $2.7 billion, which included $307 million in payments for locomotives that were purchased under seller financing and delivered in 2015. More than half of the funds will be used to maintain infrastructure to help ensure a safe and reliable network. Equipment investments are down significantly from the prior year due to the completion of the locomotive purchase commitment.

The 2017 budget also includes about $270 million for ongoing PTC work. The Class I has spent about $1.8 billion on PTC through 2016 and now pegs the total cost of implementation at about $2.4 billion.

The remaining Class I — Kansas City Southern — has reduced capex by about $30 million year over year and expects to spend $550 million to $560 million in 2017. General and maintenance spending is down because of infrastructure improvements made over the past several years, including the completion of the Monterrey-to-Nuevo Laredo track upgrade in Mexico last year.

Although no money is set aside for locomotive purchases — KCS has no plans to acquire any in 2017 — there are dollars allocated for PTC work. But PTC spending is expected to drop substantially starting in 2018.

KCS plans to keep enhancing capacity across its network in 2017, led by a continued investment in Sanchez yard in Nuevo Laredo, Mexico, and additional mainline siding capacity projects. The yard expansion is expected to provide additional capacity and improved mechanical facilities in 2017. In addition, work at the Sasol support yard facility in Mossville, La., will continue and is scheduled for completion in late 2017.