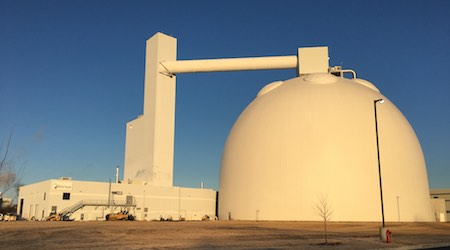 The storage dome can hold 60,000 metric tons of sugar.Photo – American Crystal Sugar Co. By Daniel Niepow, Associate EditorUnited Sugars Corp. and American Crystal Sugar Co. in November 2016 unveiled a $44 million bulk sugar storage and transfer facility on BNSF Railway Co.'s network in Montgomery, Ill. Located 45 miles west of Chicago, the facility is in an ideal spot for reaching United Sugars' large customer base in the Chicagoland and Great Lakes areas, said BNSF Director of Ethanol and Bulk Foods Keeley Motley at the Midwest Association of Rail Shippers (MARS) winter conference earlier this month.In addition, the site is well situated for sugar shipments arriving from the Red River Valley at the Minnesota-North Dakota border."If you're loading the rail cars in Minnesota and North Dakota, you're already west of Chicago, … so you're not having to go further than necessary," Motley told attendees at the conference, which ran Jan. 11-12 in Oak Brook, Ill. The 20-acre site includes a 26,000-square-foot storage dome, which can hold 60,000 metric tons of sugar. The shipper expects to move almost twice as much sugar to customers each year.BNSF officials anticipate that the facility will lead to a 10 percent reduction in the cycle time for shipping sugar, Motley said. 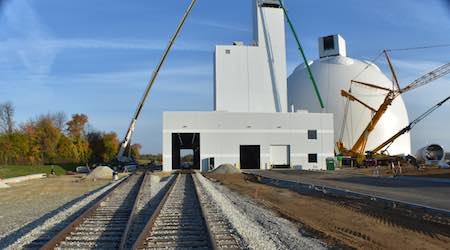 Before the storage dome was built, the railroad shipped sugar directly to Chicago-area receivers that didn't always have storage space for the product. That meant rail car cars could sit idle waiting to be unloaded.

"Any time that the rail car is sitting at the receiver means that's time it's not back at the plant getting ready for its next load," Motley said.

"It's a very collaborative process with the customer," Motley said. "We want to make sure that whatever location is decided on makes sense today but also in the future. We want the opportunity to grow with our partners."

Another deciding factor for the location decision? Chicago's status as "confectionary capital" of the United States, Motley said. About 12 percent of U.S. confectionary shipments originate in the Chicagoland area, where there are more than 6,000 workers involved in the candy industry.

"That is a big area for sugar, and Chicago is already a huge rail hub," she said.

The short line collaborated with BNSF's economic development team to develop a rail service plan for the facility, said BJRY Director of Operations and Marketing Jonathon Wingate, who spoke at the MARS conference.

The two railroads worked to ensure they'd have the capacity to handle the additional traffic, he added.

"Our site is built out for our immediate needs but has the capacity to address many different future needs," Bjerke said.

The 134-foot-high dome is the largest sugar storage facility not attached to a sugar factory in the United States, United Sugars officials said. The site also features 5,500 feet of track space and a 17,000-square-foot transfer facility.